One of my favourite things is a decent breakfast, the kind you buy at a café. My local is Café 1923, run by a wonderful Lebanese family. The sister makes great coffee, the mum makes, with love, Adelaide’s best scrambled eggs, and the son’s OCD keeps me entertained for the duration of my stay. He lines the business cards up in rows on his counter, and when his back is turned, I give them all a slight twist. It’s breakfast with a show.

No breakfast can truly be great, without a cup of real coffee. Real, good coffee is an experience to savour and an event to look forward to with relish. It’s the start, middle and end of any half-decent day and, if you can find it, it’s about the best road trip companion out there, along with Spotify and a decent pair of sunnies. 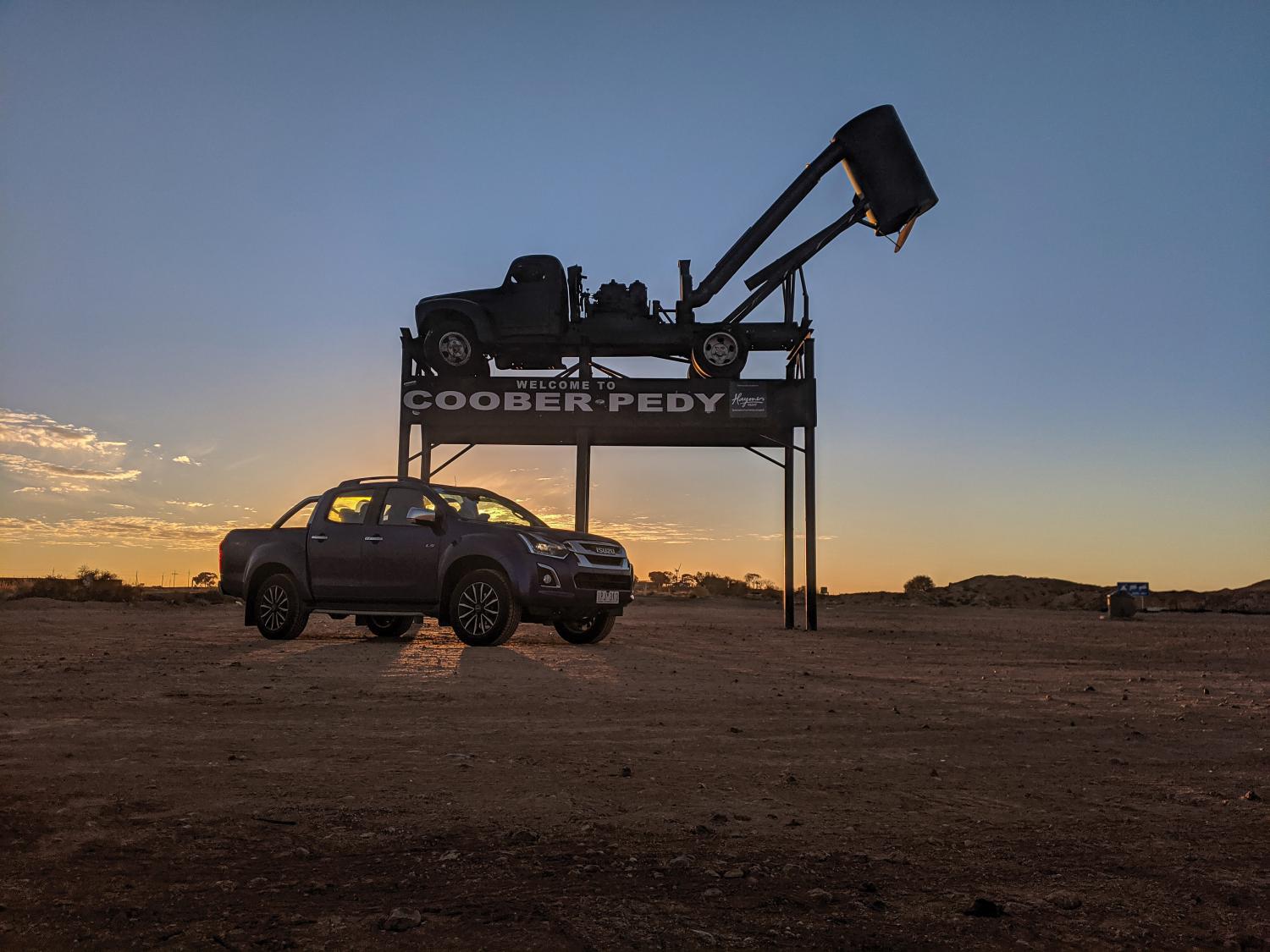 Finding great breakfasts and coffee outside of major cities, isn’t always easy though, is it? I regularly drive from Adelaide to Melbourne, and while the situation is improving to a degree, the pickings remain slim. There’s a reasonable coffee to be had at Waffles & Jaffles in Coonalpyn, across the road from the painted silos, and my other stop is the Windmill Café in Kaniva, right next to the round-a-bout. Breakfasts, well, they’re still better in Adelaide.

One of my favourite towns in Australia is Alice Springs. When I admit this, most people raise their eyebrows and snigger a little, but for me, it’s a place where I feel relaxed, at peace and at home. Why I don’t know. I’ve been there many times, almost always on the way to somewhere else, like the Simpson Desert, but every trip has involved family and great friends, and in peak season, there’s a holiday atmosphere about the place.

For me, it’s the place I’ve regularly found myself during, or at the start of, an off-road adventure. The place where you clean up, check the Land Rover for leaks, kick back with a drink, and relax for a few days. It’s also home to some interesting cafes, and breakfasts and coffee, as you now know, are a couple of my things. If you’re similarly inclined, then rough and tumble Alice Springs, won’t necessarily disappoint. 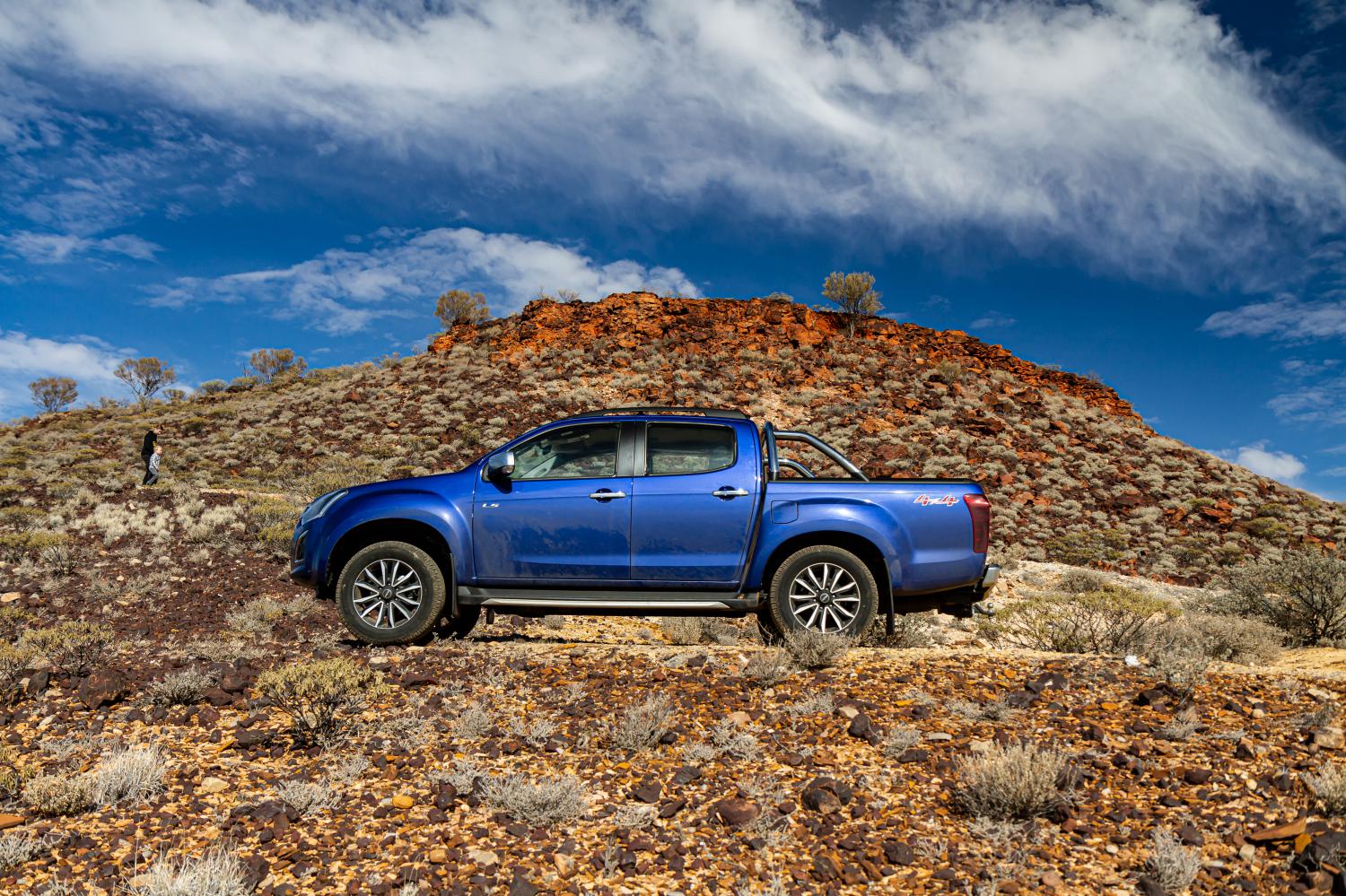 Perched on a mesa north of Marla

Road tripping to Alice has slid comfortably into position as an annual event, with this year being no exception and the only decision to make, besides choosing the dates, was what to drive.

I’ve got a five-year-old son who doesn’t like being left behind these days, so the Landy was out. It’s a two-seater 110, and I’m not comfortable with him sitting upfront in a booster seat. The Landy turns any drive into an adventure, and I love it for the way it does that, but I love my son more. There’s always TREV my MQ Triton, and I’ll happily drive that ute anywhere, but this was a drive, and we review new 4X4s by driving them, so it seemed logical to get my bum into something brand new.

Regular readers will know that we have a great relationship with Isuzu Utes Australia (IUA). We aren’t in any way sponsored by IUA, but David’s been the anchor-man for IUA’s I-Venture Club since it started up five years ago, and he personally owns both a D-MAX and an M-UX. 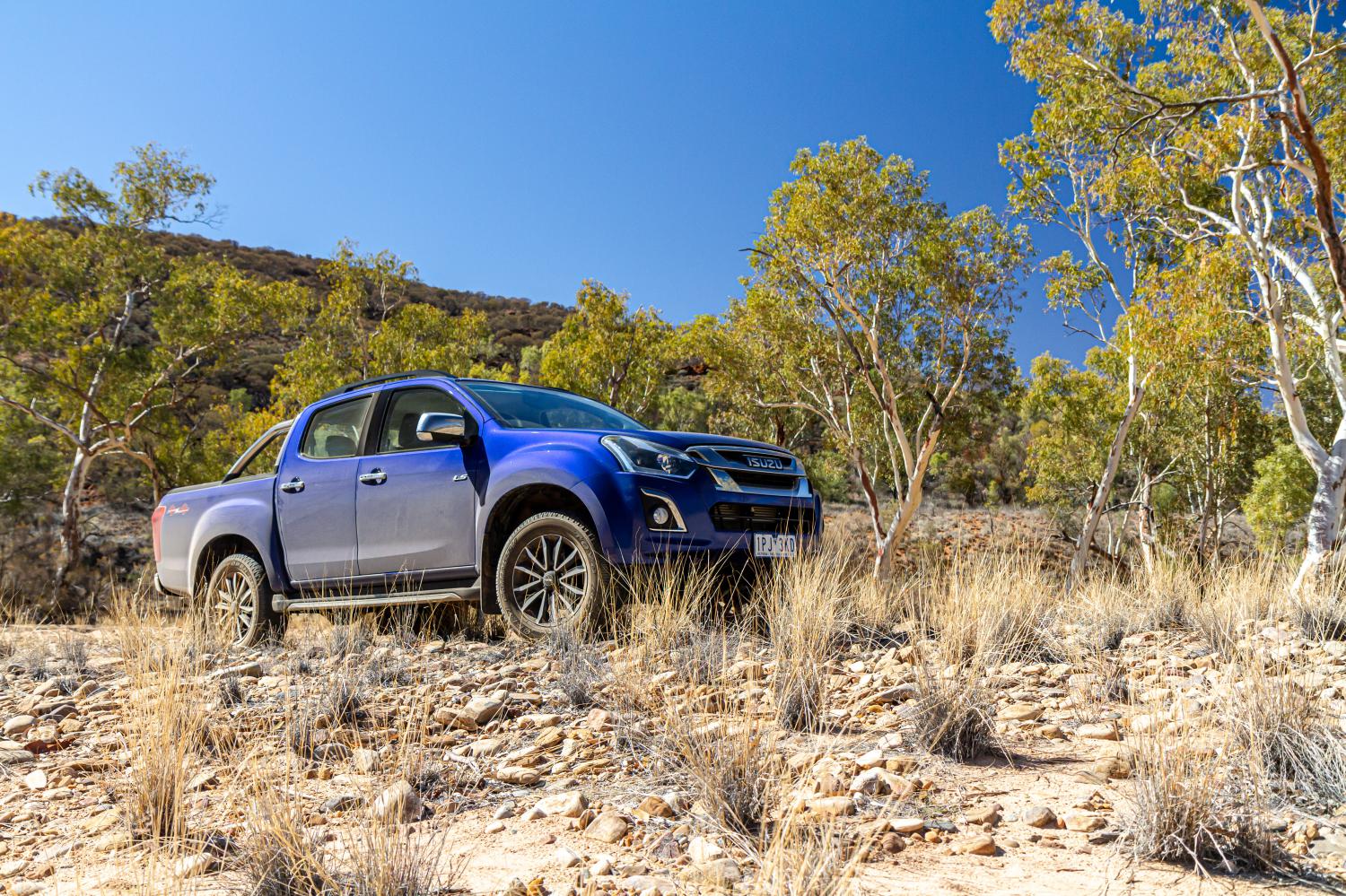 A chap by the name of Dave Harding, who is now at CarAdvice, used to be the PR and Marketing Manager at IUA, and before that at FPV. Dave was the first PR person to put me into a press car, an FPV Typhoon, back in the early days of The Motor Report, a website I started in 2007 and one that disappeared forever just recently. Getting your hands on press cars isn’t easy in the digital age, and on that score, I’ll forever be in Mr Harding’s debt.

A few years ago, Dave, who was then with IUA, put me in a D-MAX and booked me into an upcoming Adelaide I-Venture Club event. That was where I met David Wilson and Loaded 4X4 was born. So yes, our ties with IUA run deep and you could say that this magazine might not exist without them, and you wouldn’t be far from the truth, in a round-a-bout sort of a way.

My callout for a set of wheels was answered by IUA, and one of their recently updated MY19 D-MAXs was made available in top-spec LS-T trim. The MY19 update is only a mild one, with new alloy wheels and a longer six-year / 150,000km warranty being the main headlines. Besides that, the D-MAX soldiers on with its revered 4JJ1 3.0-litre turbo-diesel and six-speed Aisin automatic drivetrain. It’s a rock-solid combination that has attracted a passionate owner group over recent years, and this is in evidence at every I-Venture Club trip that I’m fortunate enough to attend. 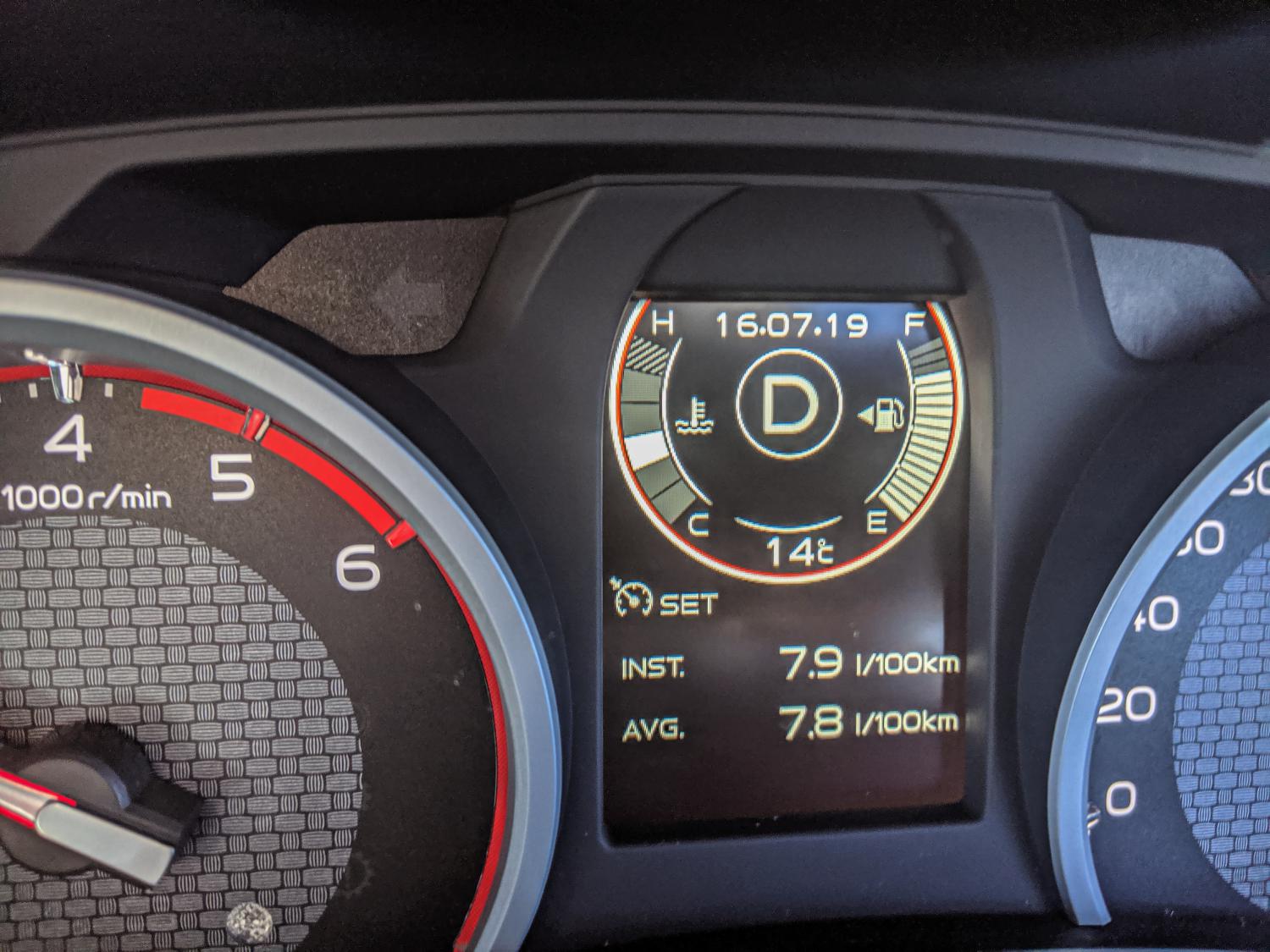 Got to love a stock 4X4. Look at the average fuel economy!

I’m well familiar with the D-MAX, and as far as road trip buddies go, it’s one that eats up the miles in a relaxed and easy-going manner. Unlike the Ranger, it’s delightfully simple, and I don’t have the interest or patience required to decipher the Ranger’s plethora of electronic crap or try and make sense of its dashboard or whatever happens to be beeping at me at the time. Unlike a HiLux, it’s delightfully free of DPF issues, and if I were buying a 4X4 ute right now, it would be a choice between the D-MAX and the MR Triton.

No, the DMAX’s 4JJ1 engine isn’t the last word in aural refinement, and its interior is dated, but it’s a strong and honest package. There’s an all-new D-MAX on the way, and we’re guessing it will make an appearance in Australia in late 2020, but it’s not known if the 4JJ1 will remain a fixture, or be replaced with a smaller capacity turbo-diesel. A reworked 4JJ1 would be just the ticket in this writer’s opinion.

There were two D-MAX takeaways from this trip, the first being an average fuel consumption of 7.8 L/100km sitting on 110km/h, with four people on board and a tub full of luggage. At that speed, the D-MAX is pulling just 1,600rpm in sixth. The other is that the stock suspension rides nicely over some of the tamer sections of the Finke Desert Race track! They look great in blue as well, but that’d be three takeaways, and I only promised two. 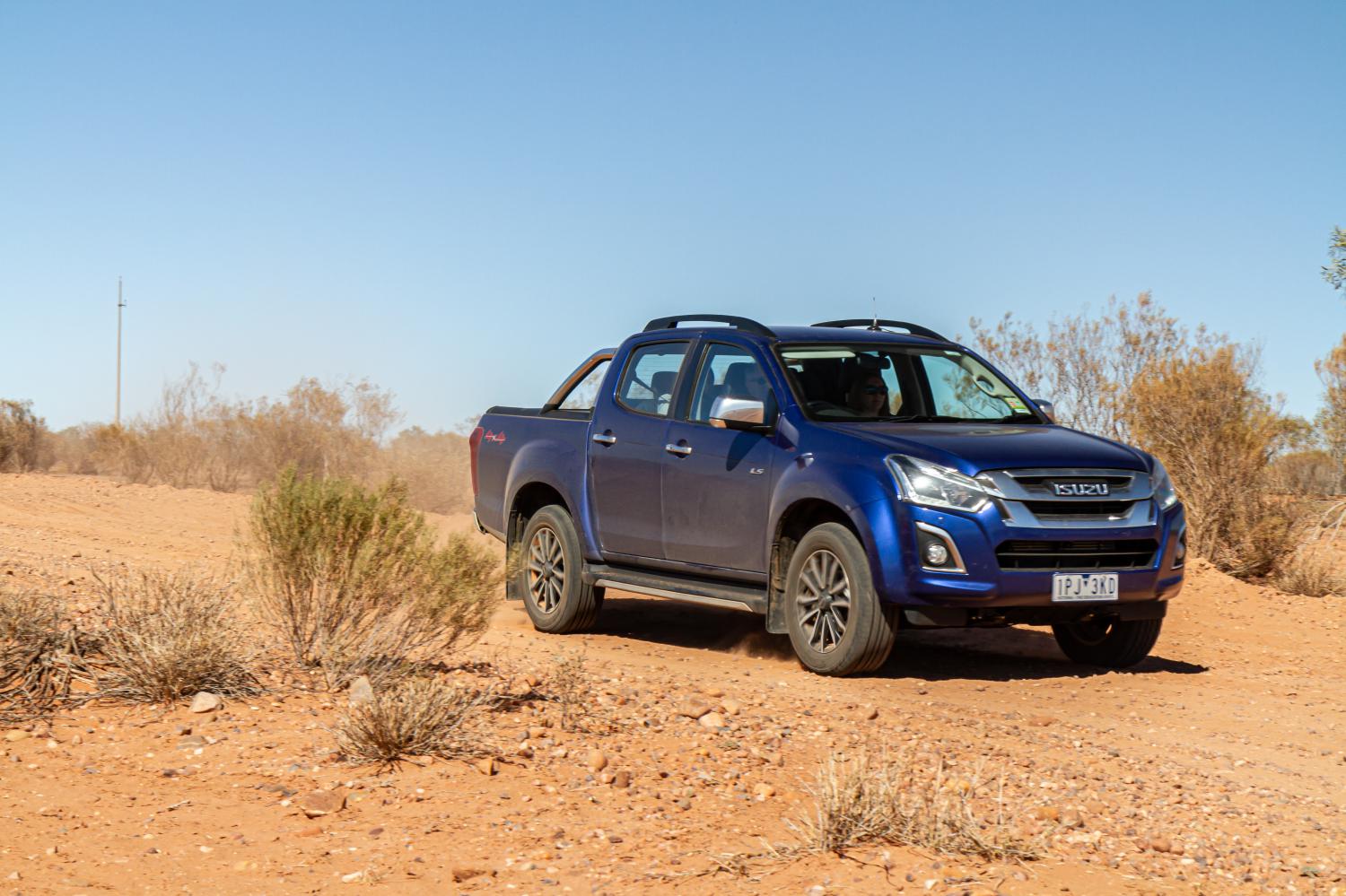 Speaking of takeaways, I don’t know why, but I prefer my coffee in a takeaway container, and that’s exactly how it arrived at the Shell Coober Pedy Roadhouse. Coober Pedy is the first night’s stop out of Adelaide and getting there takes around 10 hours to conquer the 850km trip with the requisite breaks. There used to be a decent Greek Restaurant in this amazing little ‘Wild West’ town that is situated in the middle of nowhere, but the power bills were so horrendous, the owner closed it down.

Now one of the better places to go is the restaurant attached to the Shell roadhouse on the way into town from the highway. We always fill up here on our way out at 7:30 am, sharp, just as the restaurant/café section opens and they’re good for a toasted sandwich and a not too bad takeaway coffee. I’d give them 7/10 for the coffee here, and that makes it the best coffee between Adelaide and Alice, that I’ve tried at least.

Marla is the next fuel stop, 236kms north of Coober Pedy, and if you’re brave you could try waiting in line for a coffee in the restaurant area. If you’re lucky, you’ll be served, and I wouldn’t push my luck further by ordering a hot beverage, opt instead for a Farmers Union Iced Coffee. It’s the legend of Iced Coffees and has been powering building sites across South Australia for decades. 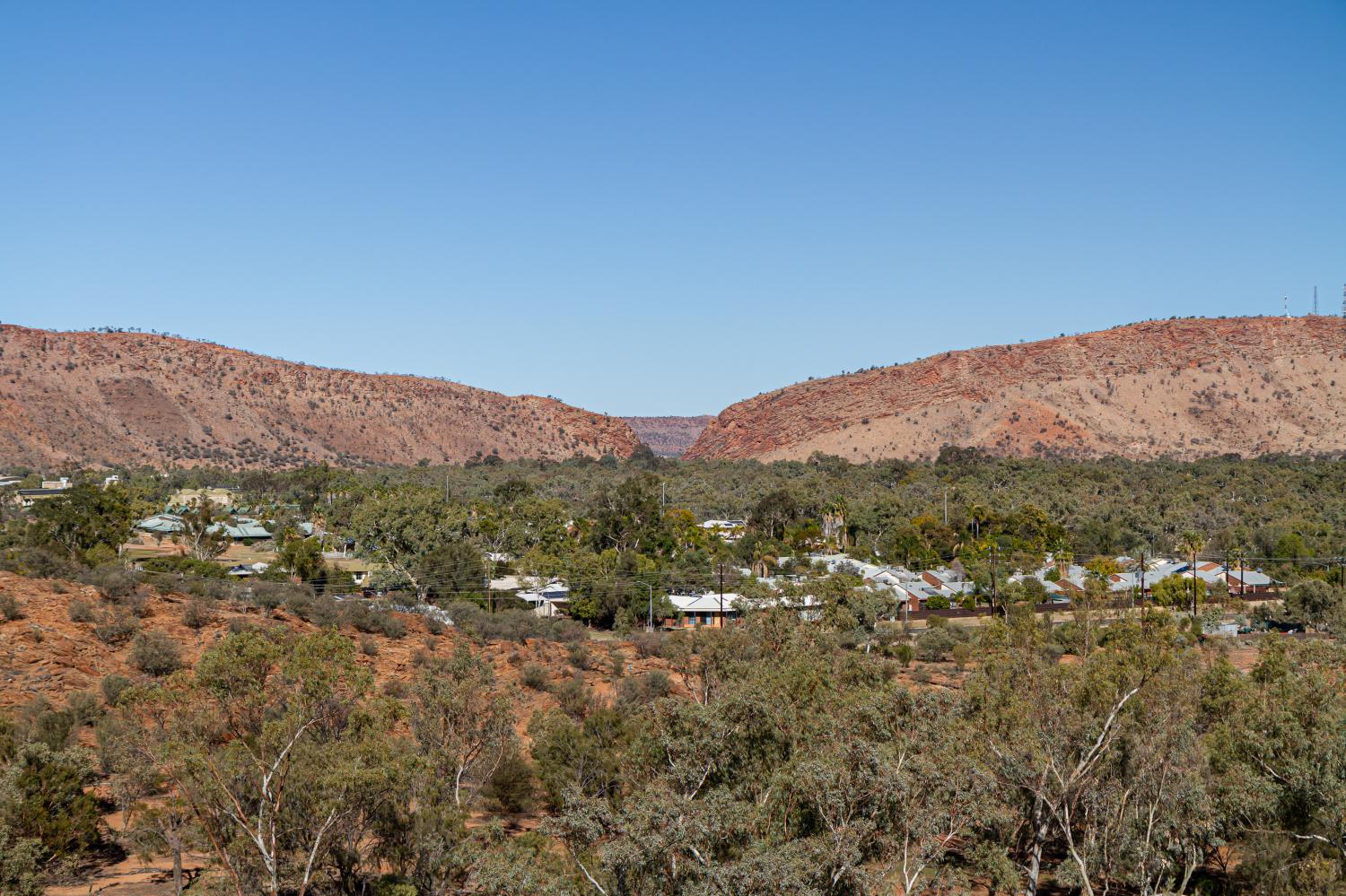 The view of Alice Springs from the hill behind Olive Pink

From Marla, it’s a lazy five-hour drive, or 454kms to Alice Springs, if you can resist the temptation of the 130km/h zone that starts at the Northern Territory border. If you can’t, then you’ll arrive in Alice a little quicker. This is Kelly Kettle country. If you want a brew, stop, light a fire under the Kelly Kettle, fill your French Press and plunge away. The process is almost as therapeutic as the result.

Once you’re in Alice, your morning options broaden modestly, and you’ve got choices to make, such as okay, better, best and what’s a view worth?

If you want the view, then the Bean Tree Café at the Olive Pink Botanic Gardens is where you need to be. The food and coffee are okay, let’s go with 6/10 (was notably better a few years ago), but the location is fantastic, with 16 hectares of gardens that include a wide-ranging collection of Central Australian native plants. The garden’s founder was Olive Muriel Pink, and her mission was to rejuvenate what was an overgrazed and barren tract of land back in 1956. Beside the café’s outdoor area is a walking trail that takes you up a ridge that looms over the café and offers up a 360-degree view of Alice Springs. It’s a short climb and well worth the effort.

If you’re chasing an earth mother vibe, then the House of Tallulah could be for you. The coffee is a solid 7/10. The menu is basic, I suspect because there is no kitchen, but you can’t knock a well-made toasted sandwich. The café itself is small with little to no seating inside, and the decor is ‘progressive cubby house’. It’s been cobbled together with love, not money, and that makes it more appealing than most uber-slick coffee houses. It’s the go-to place for local artists, writers and anyone with a caring or creative bone in their body. If you’re a foot-stomping right-winger, you’ll feel more comfortable at McDonalds, but for everyone else, peace brother. Head on over and chill for a while.

Which brings me to my fave Alice Springs breakfast venue, the Watertank Café. It’s kind of what I imagine the House of Tallulah turning into when it’s been around long enough to mature. The Watertank Café is located in the industrial heart of Alice Springs and oozes a kind of arty junkyard charm, which is fitting as it’s nestled in amongst a junkyard or two.

Self-described as an industrial recycled coffee/hub, with great food and award-winning coffee, the service is bang on, there’s plenty of room inside and out and dozens of artistic creations to ponder, starting with the amazing giant-sized tap that gushes plant life near the entrance and ending with a light and chain arrangement that every bloke wants to take home.

The coffee at The Watertank Café rates a 9/10 as does the food. If you’re a coffee-head, then this café will be your Central Australian, middle of nowhere, saviour. 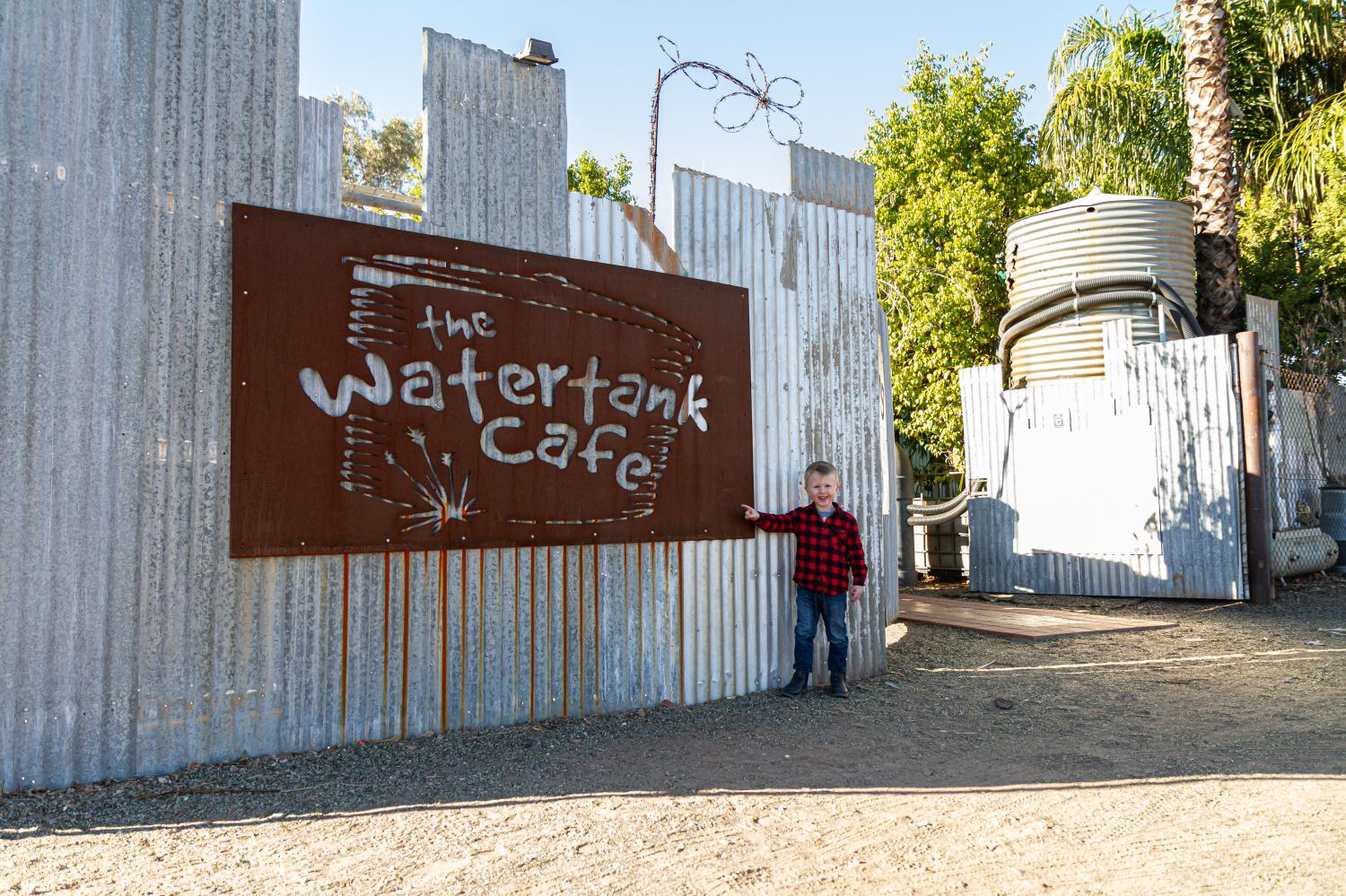 The place to be if you like your coffee!

Of course, nobody drives for two days just to try a coffee in the centre of Australia. The real beauty of Alice Springs is its proximity to some of the most stunningly beautiful Outback locations you can imagine. You can day trip to numerous locations in the East and West MacDonnell Ranges and you should, or you can keep it simple like us and head into Owen Springs Reserve, setup the Hillbilly and have a BBQ lunch in a creek bed between two rugged ridges and enjoy the solitude.

Nobody should have coffee with a BBQ lunch, that’s just wrong. This is wine time, but that and Owen Springs Reserve are stories for a future issue.

In this article:alice springs, d-max, Featured, isuzu
Up Next: 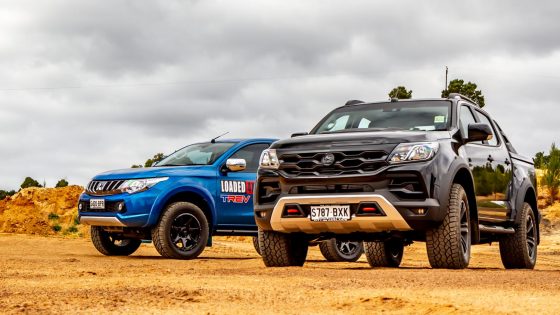 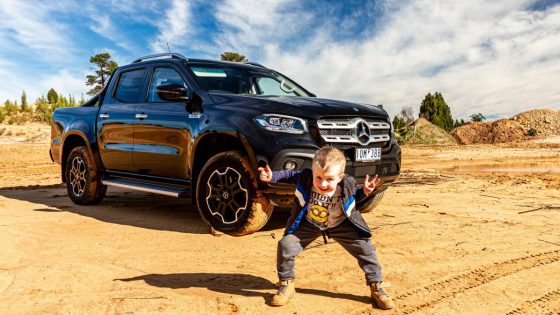 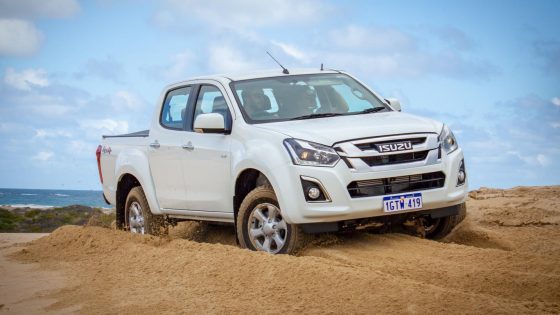